Happy New Year to all of you and many thanks for your great support in 2016. It’s already shaping up to be an excellent season. Our fifth annual random farm monitoring finally got underway the week before Christmas. Spring sowing was delayed because of the wet conditions, resulting in many late crops. As summer began, it meant that they didn’t have as much cover and prey as they normally would. The other interesting thing about this season is that it’s a big year for rice, with around 90 000 hectares across the Riverina, and that there is extensive alternative habitat in the region’s natural wetlands. But it turns out there are still plenty of bitterns in rice and this week we found our first precious nest for the season.

And stay tuned as we head out next week with six new satellite transmitters ready to roll! The Bitterns in Rice Facebook page and searching for #bitternsinrice on Twitter are the best ways to see it as it happens. 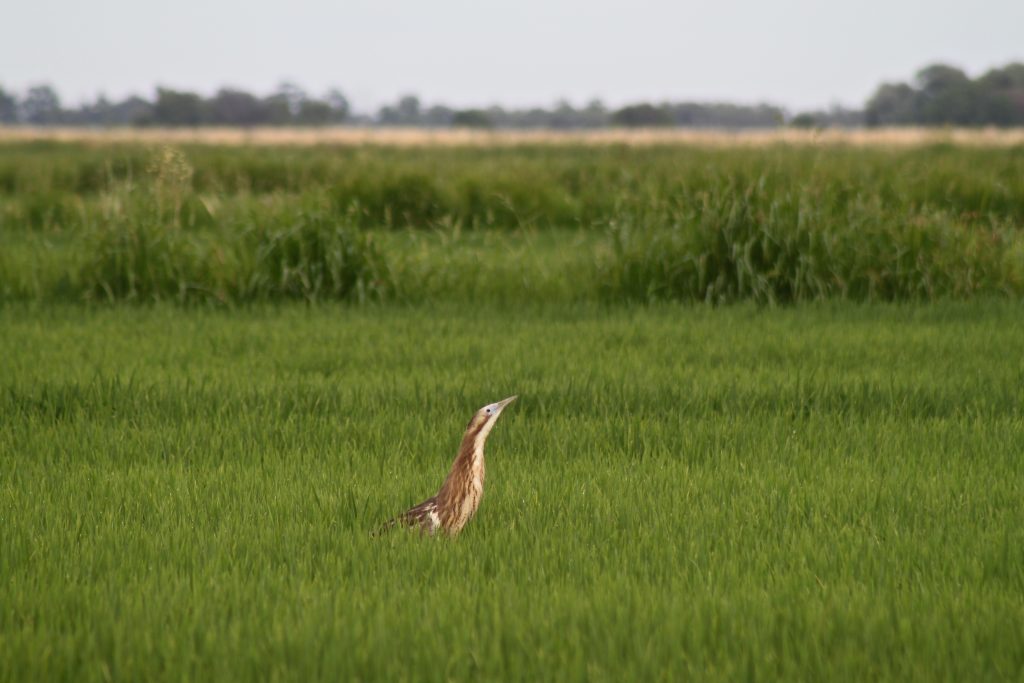 This fine, obliging specimen was one of four bitterns found in this crop near Coleambally. Now is the best time to survey bitterns in rice. The crops are only half-grown but the males are still booming. 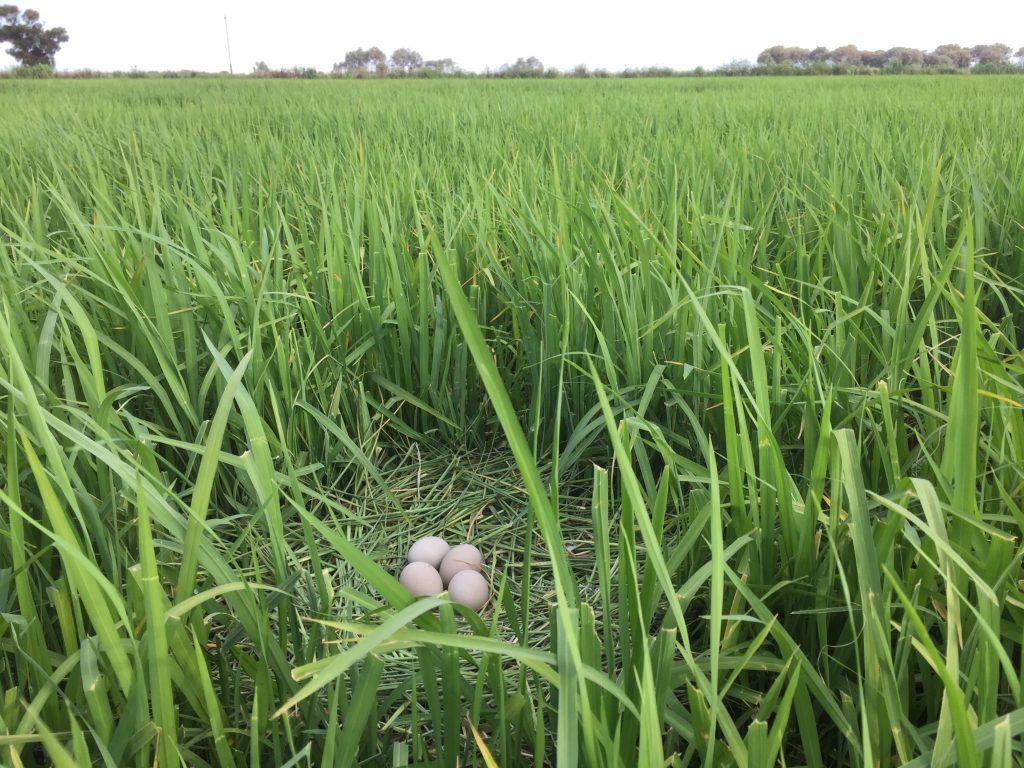 The first precious nest for the season, found 4/01/2017, in a relatively advanced aerially sown crop that had early permanent water. There are five adult bitterns in this crop, suggesting the booming male may have four nesting females in his territory.

Surveys at the randomly selected farms are geared around sunrise and sunset to maximise detection. It may seem strange not to target sites where we know there are bitterns but this approach means our sample is representative and we can confidently extrapolate our results. On top of a booming male bittern, this site had three Latham’s Snipe from Japan, a couple of Baillon’s Crake and large flocks of Glossy Ibis. 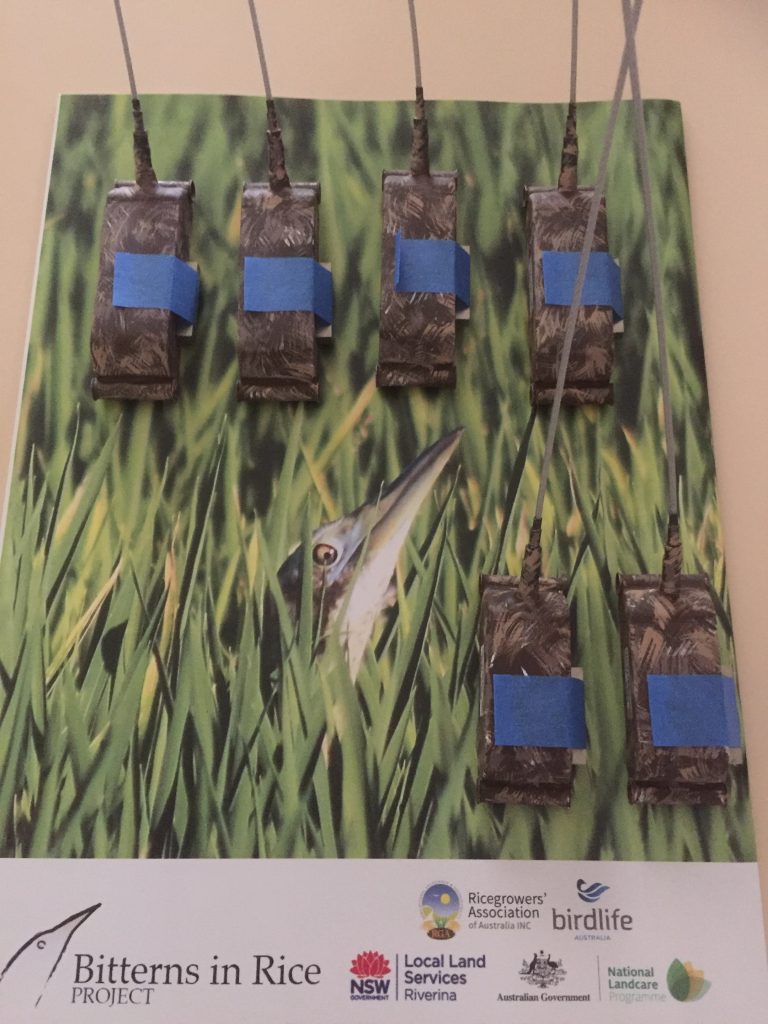 Where will these six new satellite trackers take us? Stay tuned. For a full update on the tracking work to date, read this article in the Spring edition of Australian Birdlife. 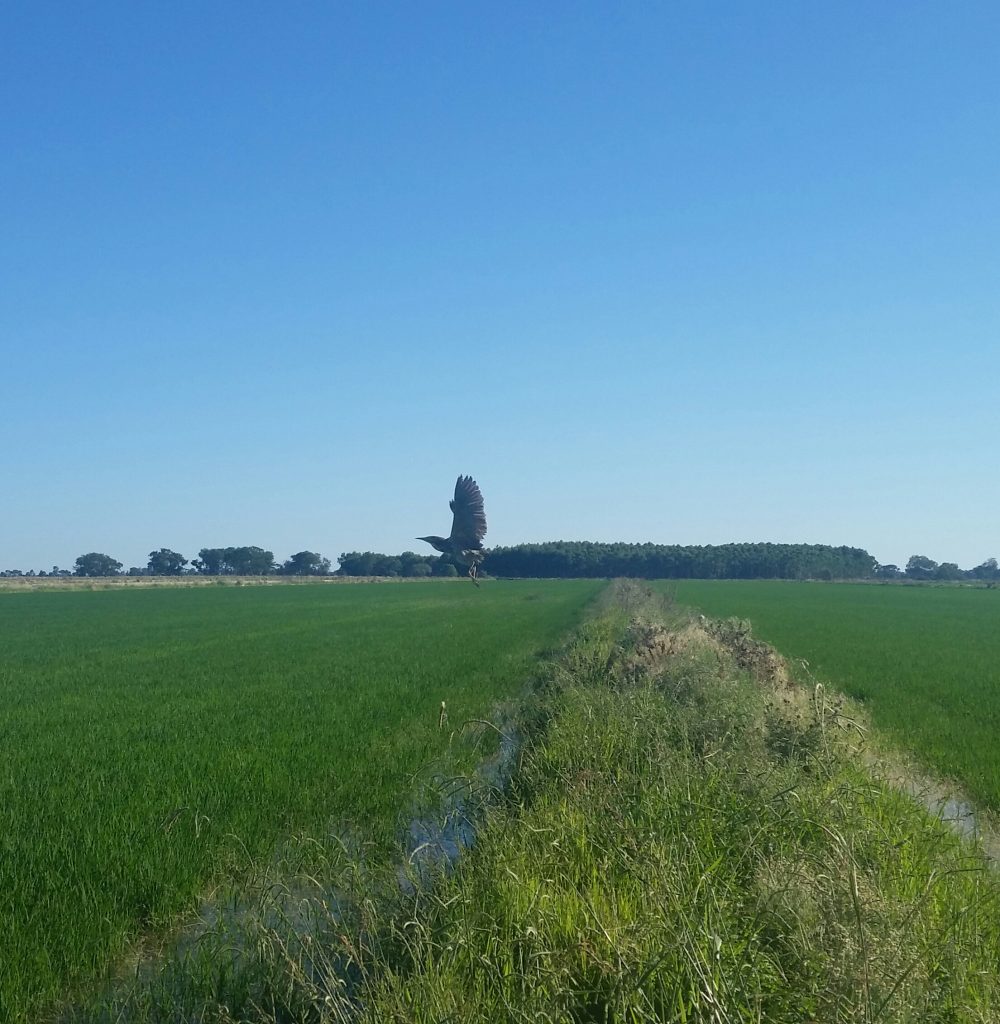 Could this be Coly-Lion back in his breeding territory? We know he dispersed 395 km to Tootgarook Swamp for winter but is he back? Despite the transmitter failing, we should be able to spot his light blue colour band. Thanks to Judy Kroek for the picture. On-farm irrigation storages are undervalued for biodiversity and have huge potential. This one we surveyed a few days ago had a White-necked Heron breeding colony, with at least nine nests. Coleambally’s egret and night-heron breeding colony has ~100 nests this summer. They feed in rice crops and nest in pines on a hill. Black-winged Stilts were found nesting in the shallow, flooded rice bays near Wakool in late November. Thanks to Les Gordon for the picture. 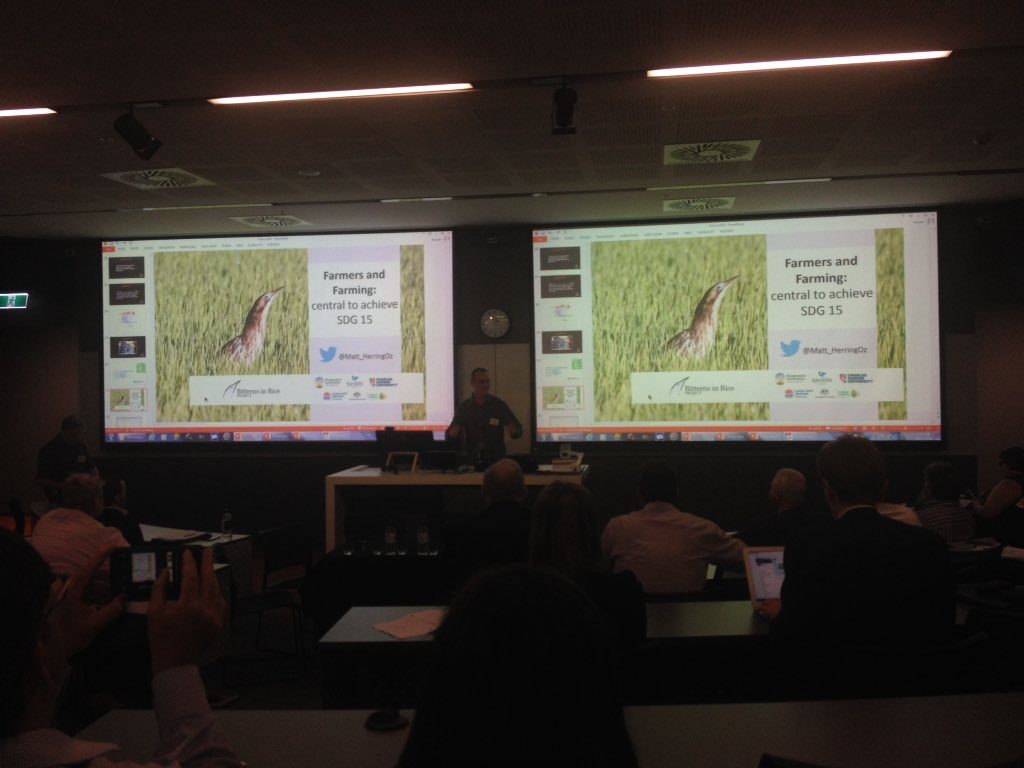 In November, we were humbled to present at the United Nations Sustainable Development Goals Australia Conference at the University of Sydney. Neil Bull and I were flying the flag for farmers as custodians of biodiversity and using the Bitterns in Rice Project as an example of how farmers and their farms will be central in achieving many of the 17 goals. The challenges are massive. The ideas are simple; nobody gets left behind and we’re all in this together. Ending poverty and making sure that as we approach 9-10 billion people by 2050 everyone has enough nourishing food, a good education and good health, all without undermining the biodiversity, land, water and climate on which we depend, is crucial. You can find out more here: http://www.globalgoals.org and check out this promotional film  https://www.youtube.com/watch?v=RpqVmvMCmp0&feature=youtu.be

A cacophony of growling Southern Bell Frogs precedes the boom of an Australasian Bittern, just moments ago in this Lignum swamp. #Lowbidgee pic.twitter.com/1EFlU6WX7g

Some of the bittern action from the Lowbidgee. Other standout wetlands for bitterns this season are those in Barmah-Millewa, NSW & VIC, and Bool Lagoon, SA.

Many #bitterns in #rice this year to choose from @Matt_HerringOz pic.twitter.com/VdnbS8OKtd

And as always, special thanks to all of the rice growers for keeping tabs on their bitterns, reporting sightings and supporting the project. None of it is possible without the likes of Hayden Cudmore from near Griffith.