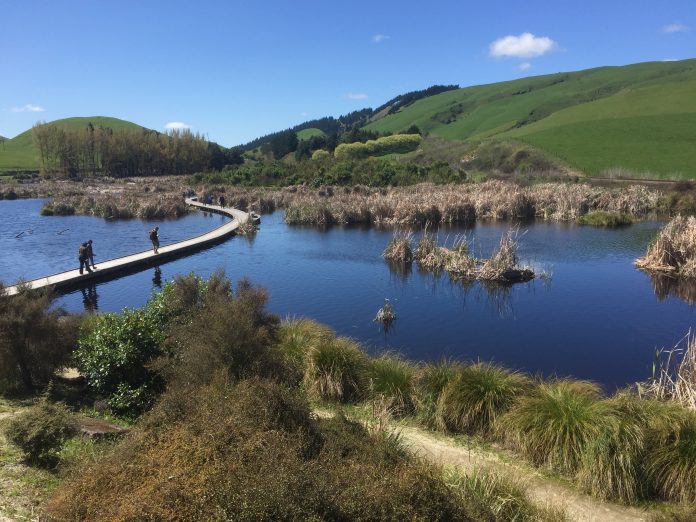 What a wonderful trip. It was as if we spent a week compiling precious pieces of a rare, incomplete jigsaw puzzle called “Australasian Bittern Ecology and Conservation”. After several years of being in touch via email and phone, it was so nice to finally get together with the NZ bittern crew and see some of their sites first-hand. There is some great work happening across the ditch and there was a strong sense of being united in working towards reversing the decline of this iconic waterbird that we share. It is affectionately known as Matuku Hūrepo in Māori language, or just Matuku for short.

The knowledge exchange began at the end of September with New Zealand’s biennial National Wetland Restoration Symposium in Napier. I was honoured to be a keynote speaker, where I focused on the importance of community engagement, novel habitats and active management. Special thanks to Nathan Burkepile and Fish and Game NZ for organising and sponsoring my trip to the conference, and to Emma Williams and the Department of Conservation (DOC) for a superb tour of bittern sites on the North Island afterwards, but more on that later.

Another keynote at the conference was Conservation Minister, Eugenie Sage, who was impressive in her grasp of wetland conservation, taking questions from the floor on key issues like water quality and dairy farming. It was refreshing to see a politician as an expert in their portfolio, and she reiterated the good news about increased funding for DOC under the Ardern Government. There were many interesting presentations over the two days (you can read the abstracts here), such as Emma’s radio-tracking of booming male bitterns, and Colin O’Donnell’s predator removal experiment that showed a significant increase in Fernbird and Spotless Crake densities following the control of rats, weasels, ferrets, stoats, hedgehogs, cats and possums. Colin anticipates similar results for bitterns.

Restoration of Pekapeka Swamp, an important bittern site in Hawkes Bay, has focused on water level control and willow removal.

We then had a day visiting wetlands around Hawkes Bay, including Pekapeka Swamp, followed by a successful bittern workshop day organised by Matt Brady from DOC. It was now crystal clear to me that there’s a lot of love for Matuku in New Zealand. With much discussion about wetland restoration targeting bitterns, it was astounding for many folk to learn about bitterns in rice and how bare, ploughed paddocks ready for sowing are able to support nesting bitterns less than three months later. There was a range of inspiring case studies from around New Zealand detailed at the workshop, and we got to visit some local work in Hawkes Bay with Hans Rook. 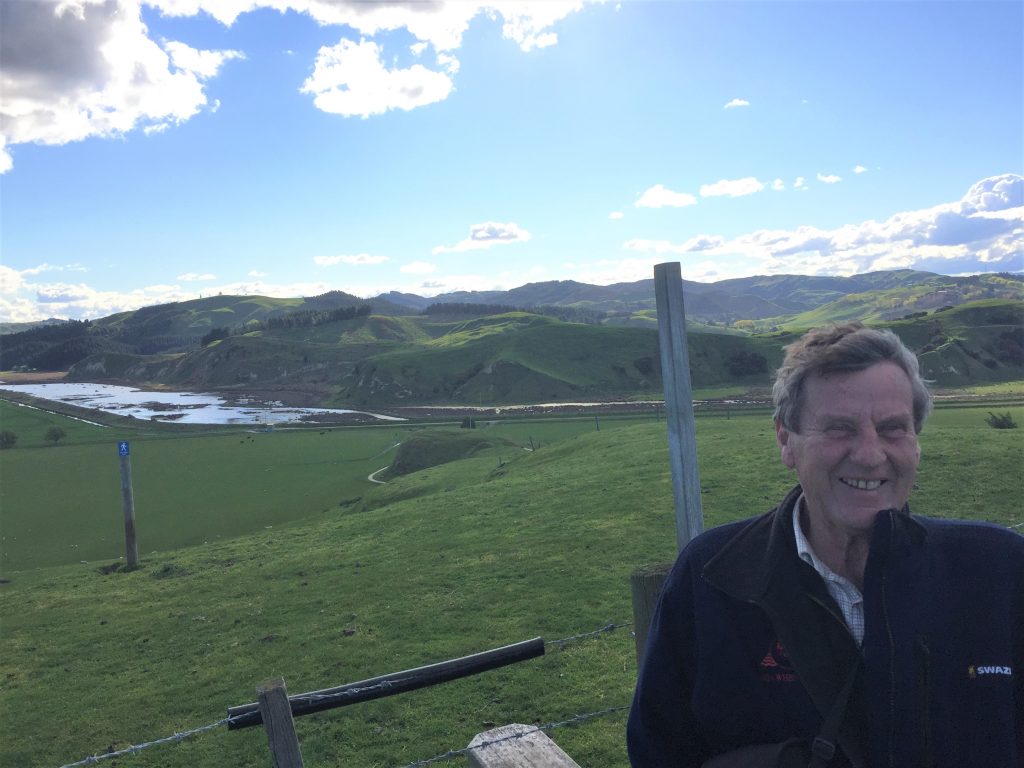 This is Hans Rook. He’s been working with local landholders, DOC, and Hawkes Bay Regional Council to help restore this wetland near Napier for Matuku. Water supply, depth management and predator control have seen Matuku numbers rise to about 14 here. 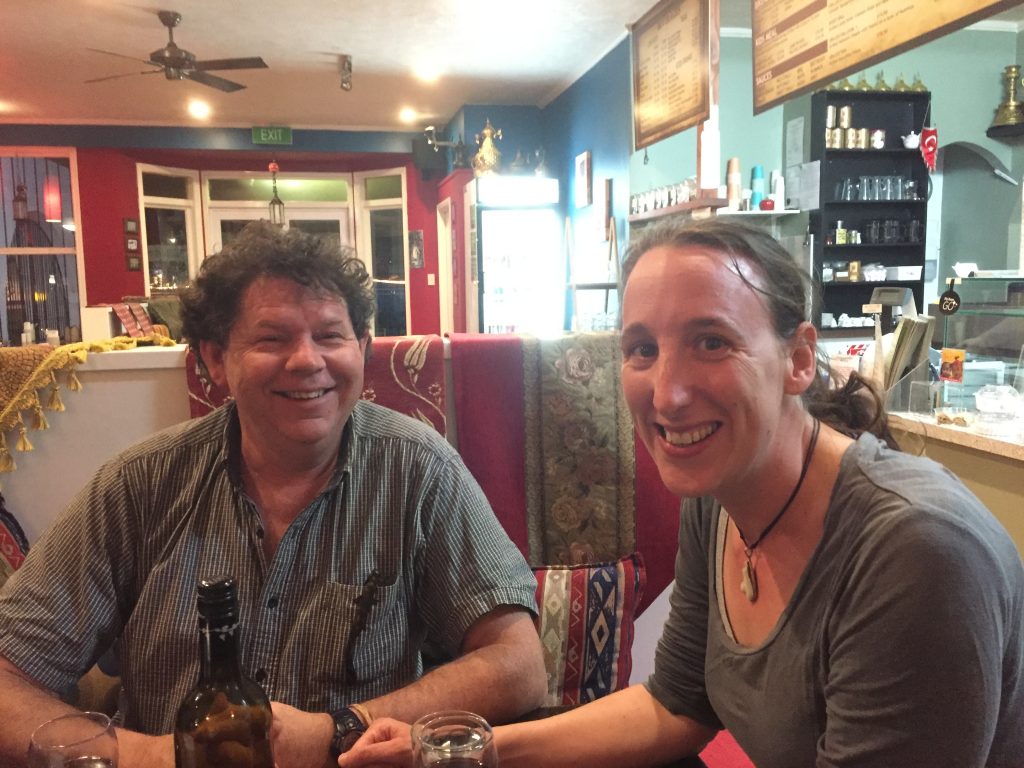 New Zealand’s bittern gurus: Colin O’Donnell and Emma Williams
With the conference and workshop now complete, it was time to begin a broader tour of bittern sites across the North Island. First stop was Lake Whatuma, and thanks to John Cheyne and Bernie Kelly, we were able to track some bitterns while kayaking. We discussed key issues like willow control, raupo (cumbungi) management, water levels and swamp harriers as bittern nest predators. This wetland has up to nine booming males, but far fewer females, perhaps only three. The apparent shortage of female bitterns across New Zealand is something Emma is very concerned about. We may well have the same problem here in Australia. While we know some of our booming males in rice fields have up to three nesting females in a single territory, there is emerging evidence that would support a general shortage of females here too. It’s definitely something we should consider; that a booming male may not be a sufficient indicator of breeding or site quality. 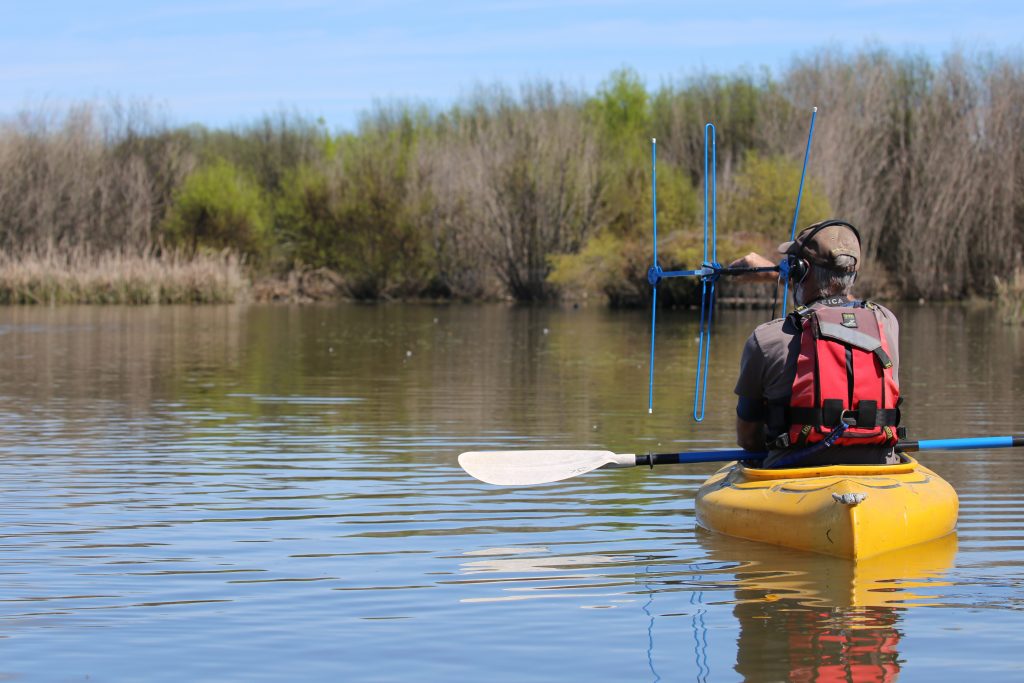 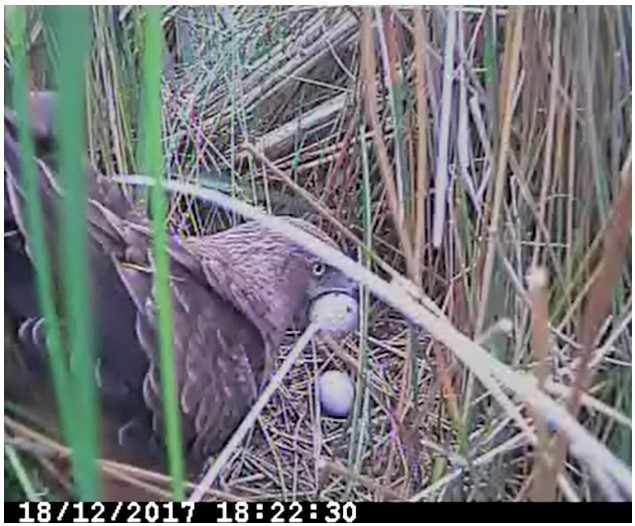 Swamp Harrier predation at a bittern nest. This has now been recorded at two bittern nests in NZ. Image: Emma Williams 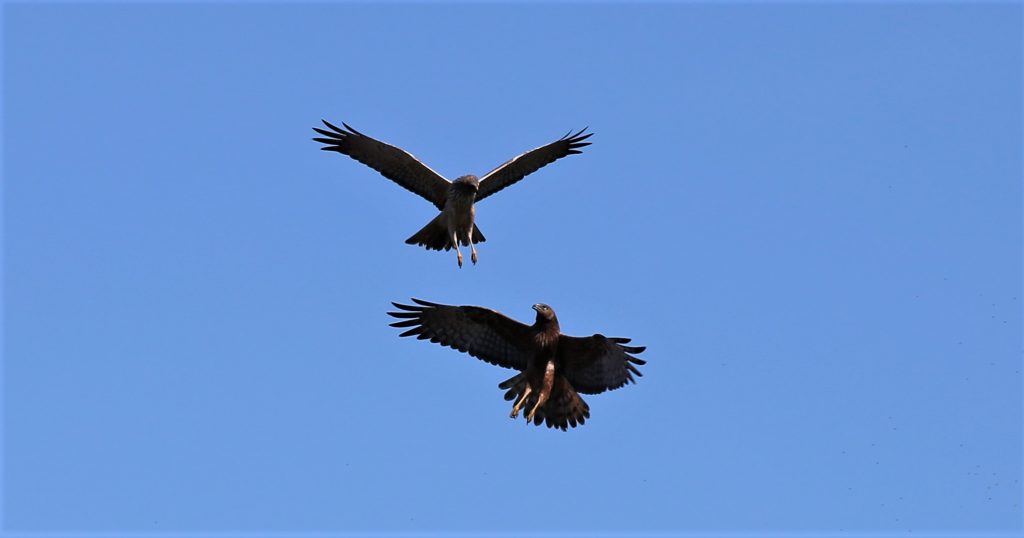 Swamp Harriers are a particularly common bird in New Zealand and are sometimes controlled to reduce predation on endangered bird species. 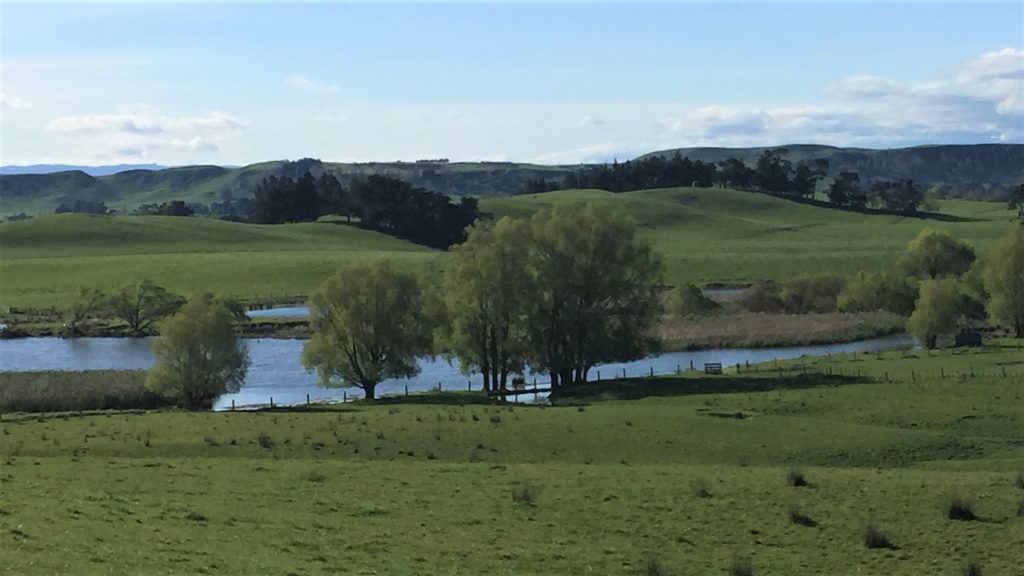 The Raupo (Cumbungi) patches in this farm dam have supported up to five bitterns. Smaller sites like this form an important part of the network of wetlands that maintain the bittern population around Hawkes Bay, with several of the tracked bitterns utilising them at different times.
It was now October and time to visit the 7200-hectare Whangamarino Wetland, between Auckland and Hamilton. This RAMSAR site was once the world’s most important wetland for the Australasian Bittern, with over 140 booming males in 1980. Nowadays, there’s only about a dozen. I learnt about the many issues that are implicated in the decline, such as introduced species and water quality, but I think the huge water level fluctuations are central. 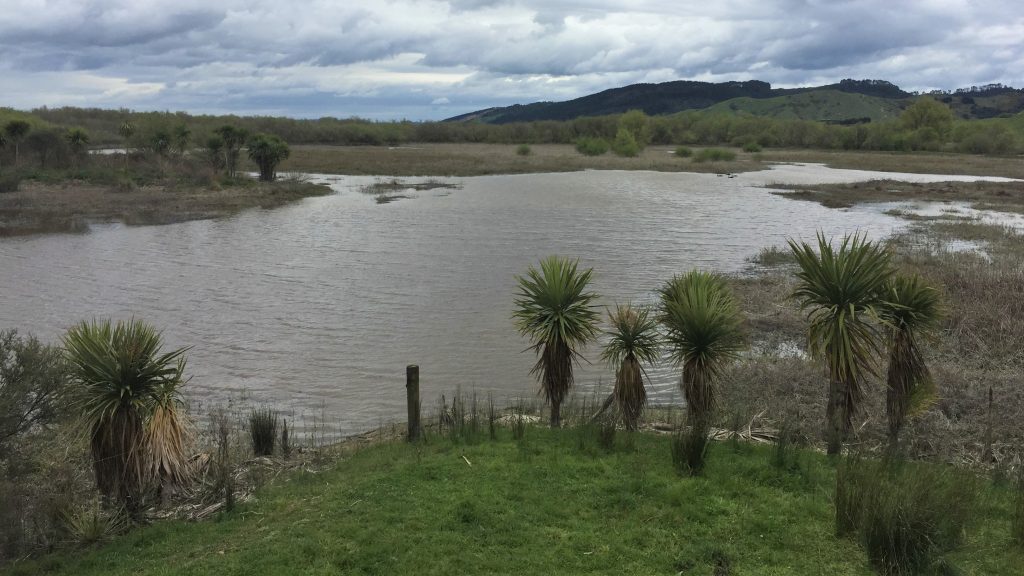 The Whangamarino Wetland, one of just six RAMSAR sites in New Zealand, and a priority site for the Arawai Kākāriki wetland restoration programme. 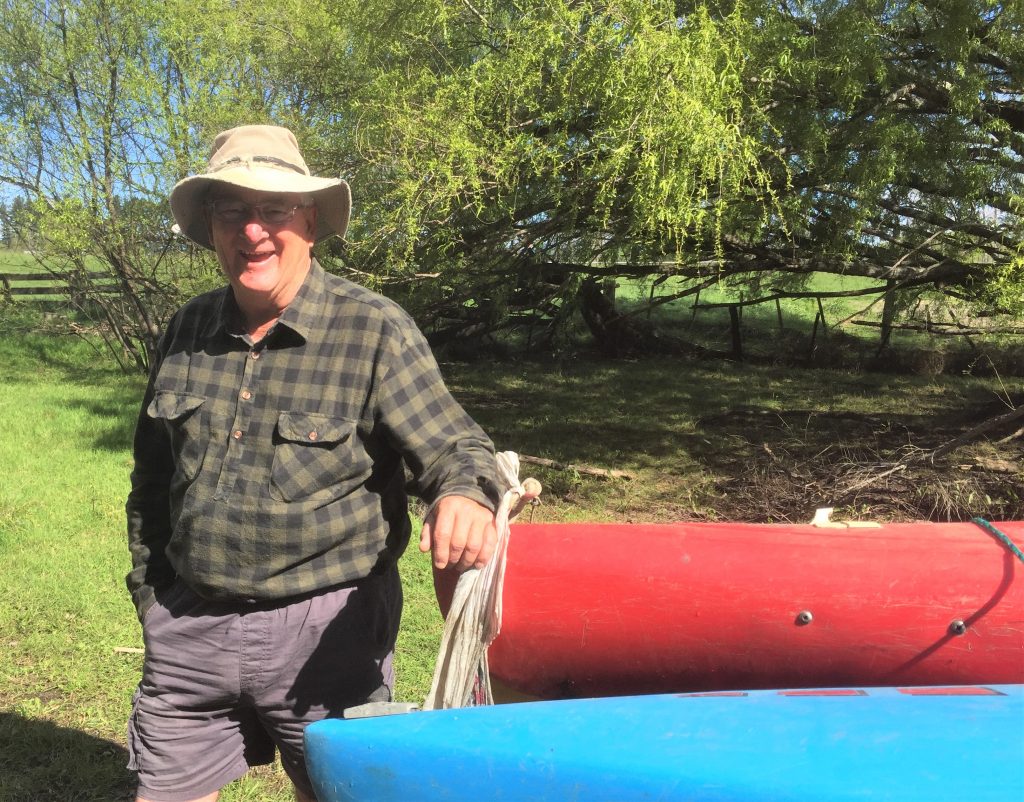 This is the legendary John Cheyne, a long-time champion of New Zealand’s wetlands. His 1980 study of bitterns at Whangamarino yielded over 140 booming males. Recent surveys suggest a 90% decline. 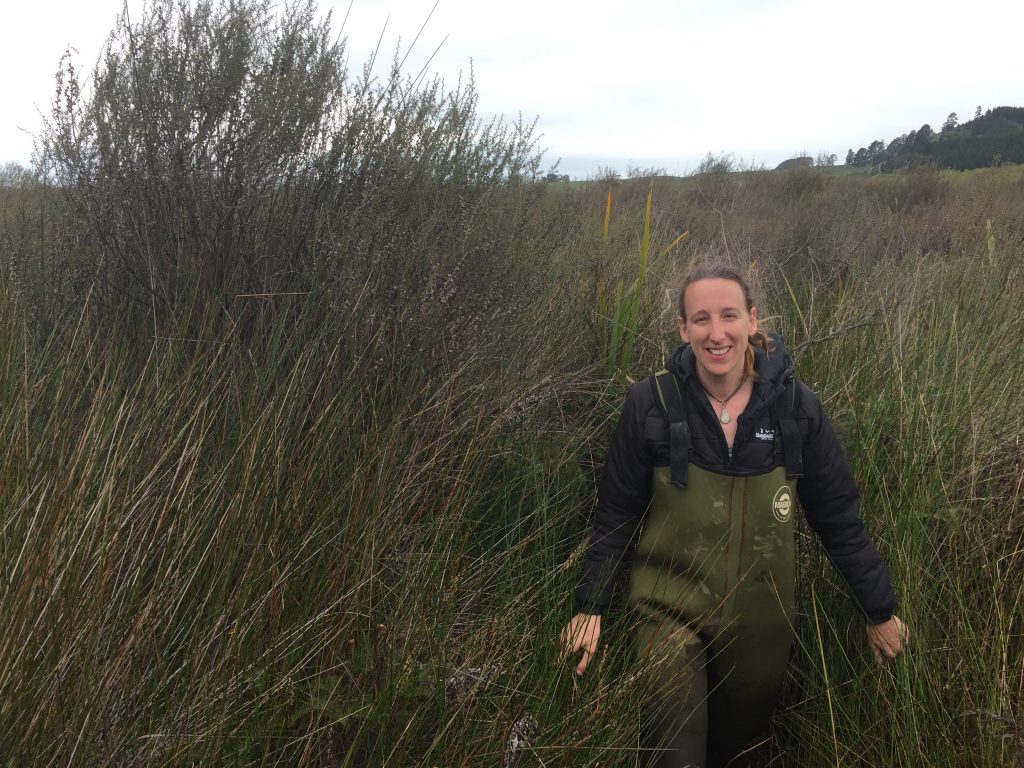 Dr Emma Williams in her natural peat bog habitat at Whangamarino, serenaded by a booming bittern and dueting Fernbirds. 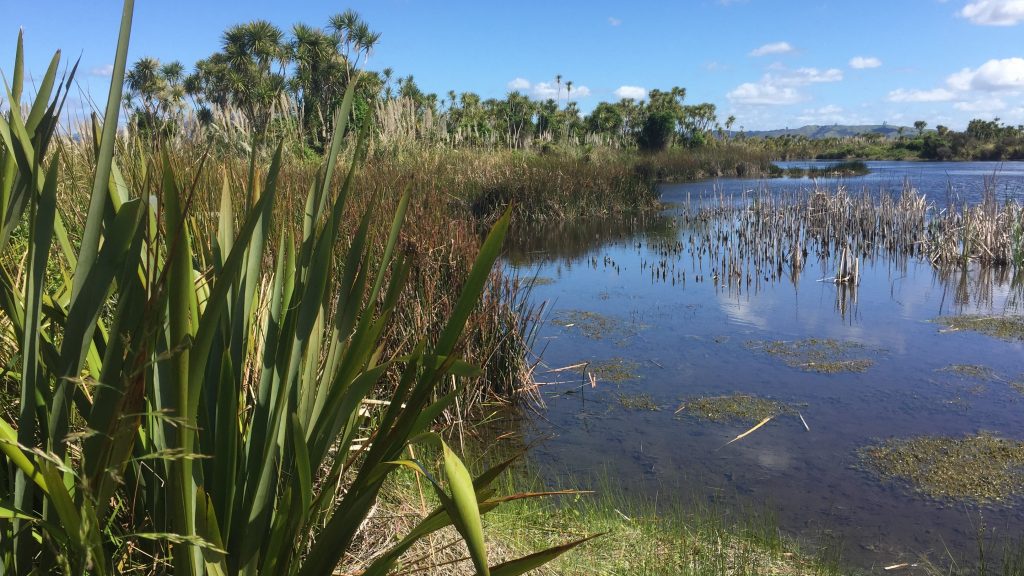 The Lower Kaituna Wetland near Tauranga.

Over near Tauranga, we visited the Lower Kaituna Wetland, and were lucky enough to spot a bittern feeding in the Eleocharis (see below). Part of the restoration work in the broader area here is basically starting from scratch, essentially constructing new wetlands. This project is a great partnership thanks to Fish and Game NZ, DOC and Bay of Plenty Regional Council. 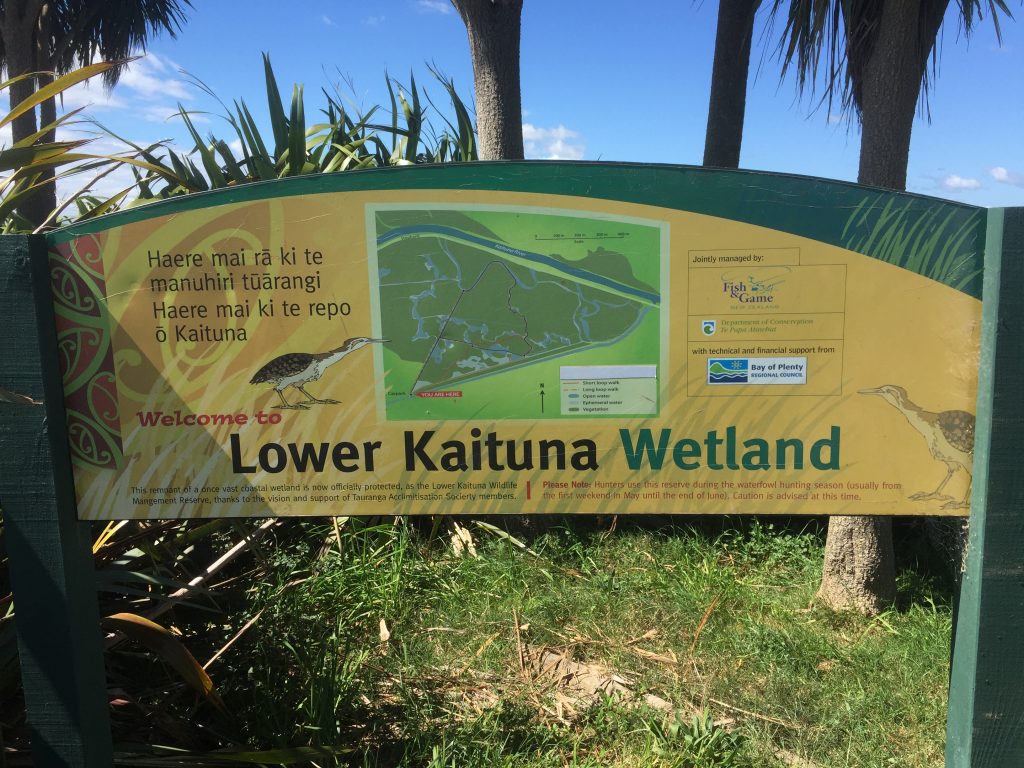 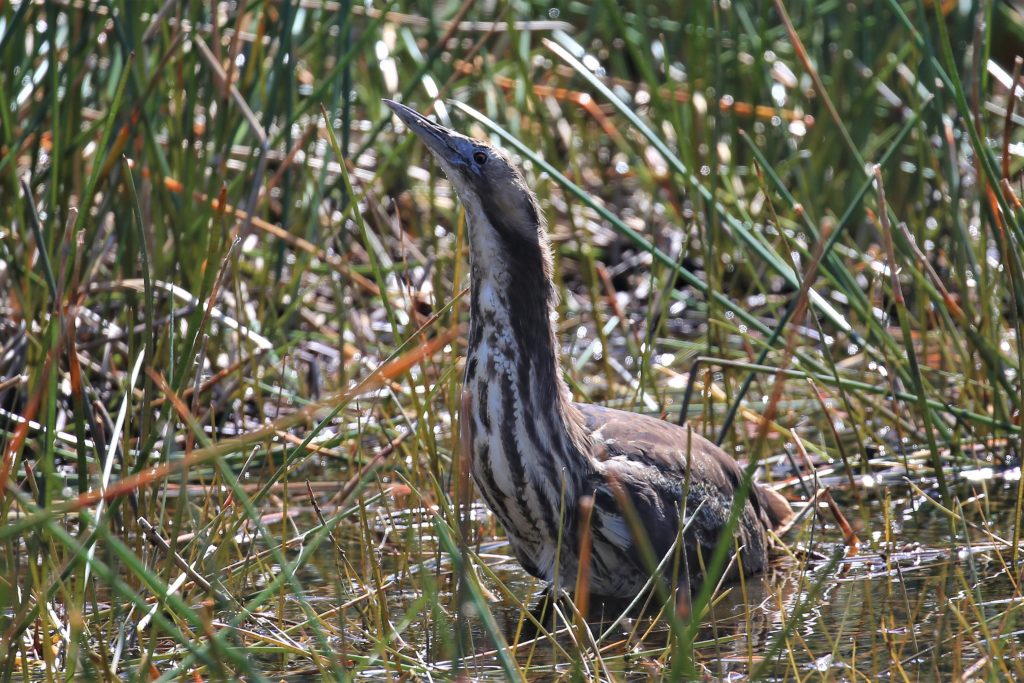 And on the edge of Tauranga itself, right on the coast, we visited a bittern breeding site that was tidal. This was quite perplexing. The vegetation is quite low and we wondered where they build their nests without being flooded. Unfledged chicks have been found by members of the public in adjacent land, including a recreational park. We talked about how this site would be suitable for a thermal drone in locating nests and monitoring breeding success. 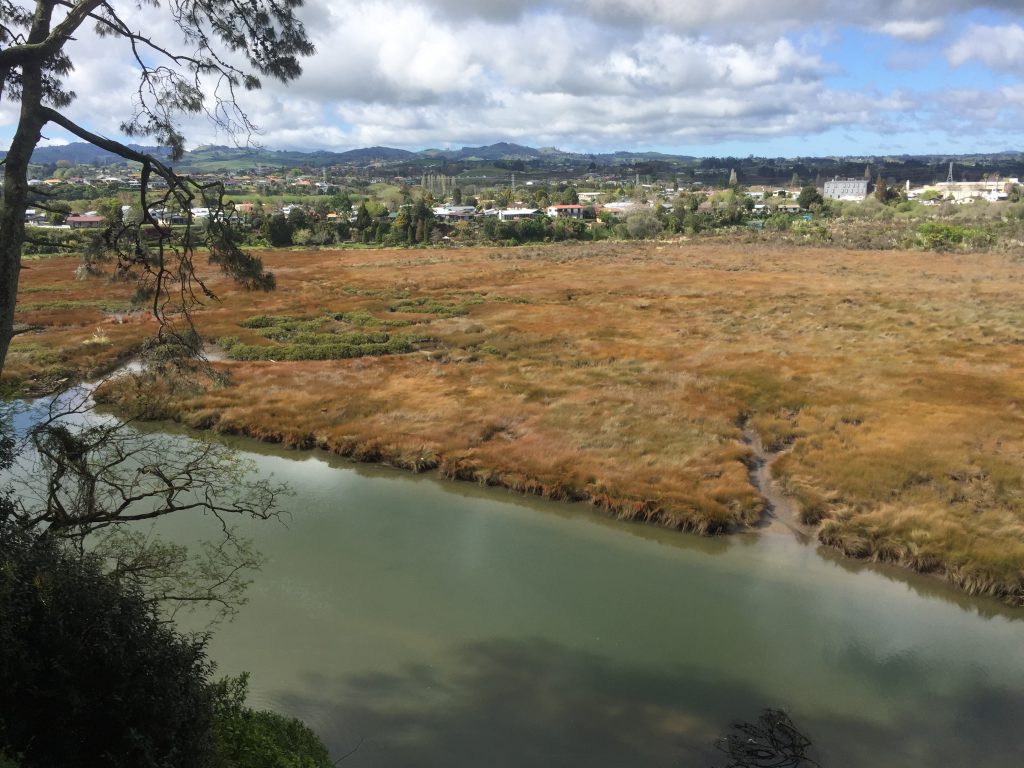 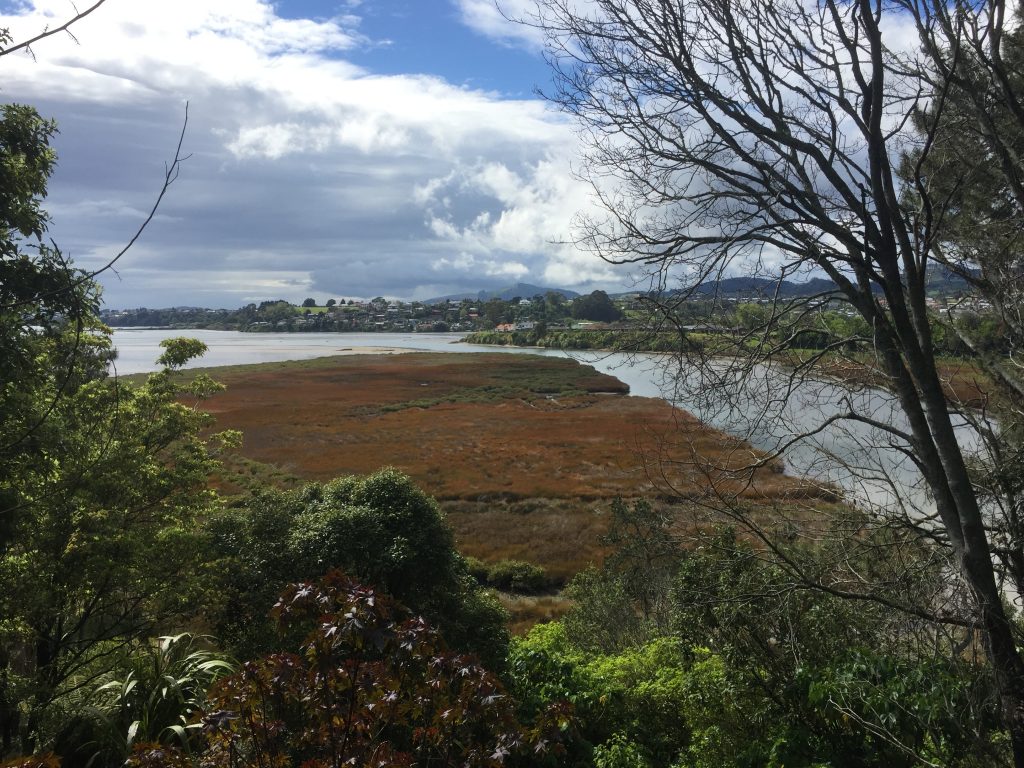 All in all, a wonderful trip, with special thanks to all who made it possible. I’m looking forward to returning the favour! The love for Matuku in NZ is admirable, and the conservation work being done is inspiring.