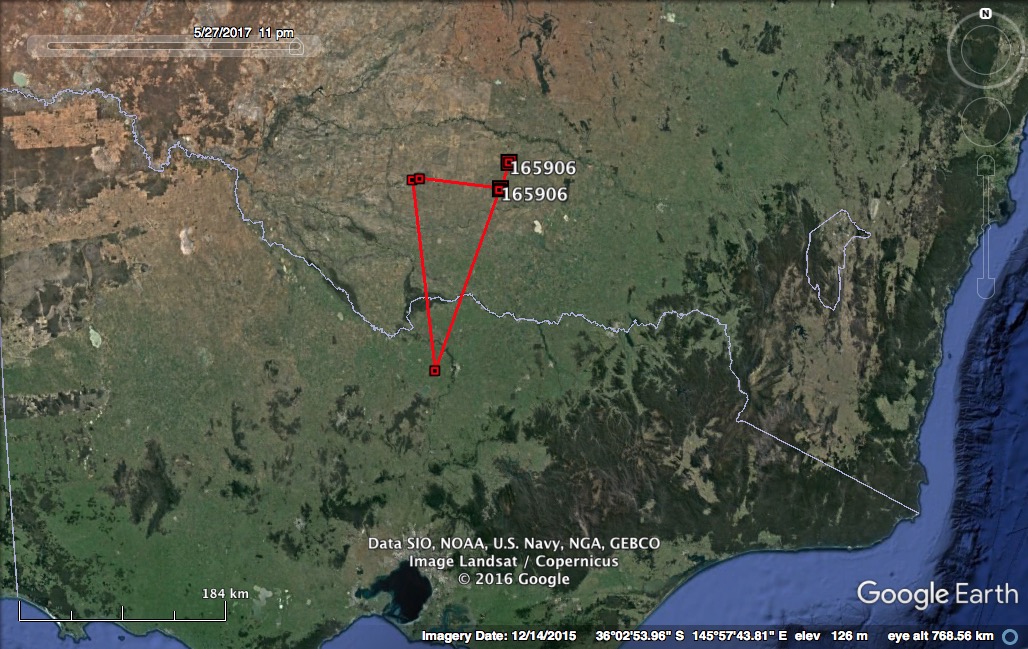 Witnessing these insights unfold is a joy. Three weeks ago, Arnold departed the rice field where we found him in April. He’s a young bird, reminiscent of Robbie and only about four months old, presumably born in the rice crop where we caught him. He headed 78 km west to Wargam Swamp near Boorooban, where environmental water had recently been delivered. The landholder was delighted with his VIB (Very Important Bittern) guest and is keen to tweak his management to further benefit bitterns in the future. But Arnold kept moving. He got halfway to Melbourne and we were convinced he was on his way to the coast. Evidently, Victoria wasn’t for him. He returned to his rice field in Coleambally and has since visited several other rice farms, presumably using channels and dams. He’s presently highly mobile and doesn’t seem to have found anywhere that he wants to stay. 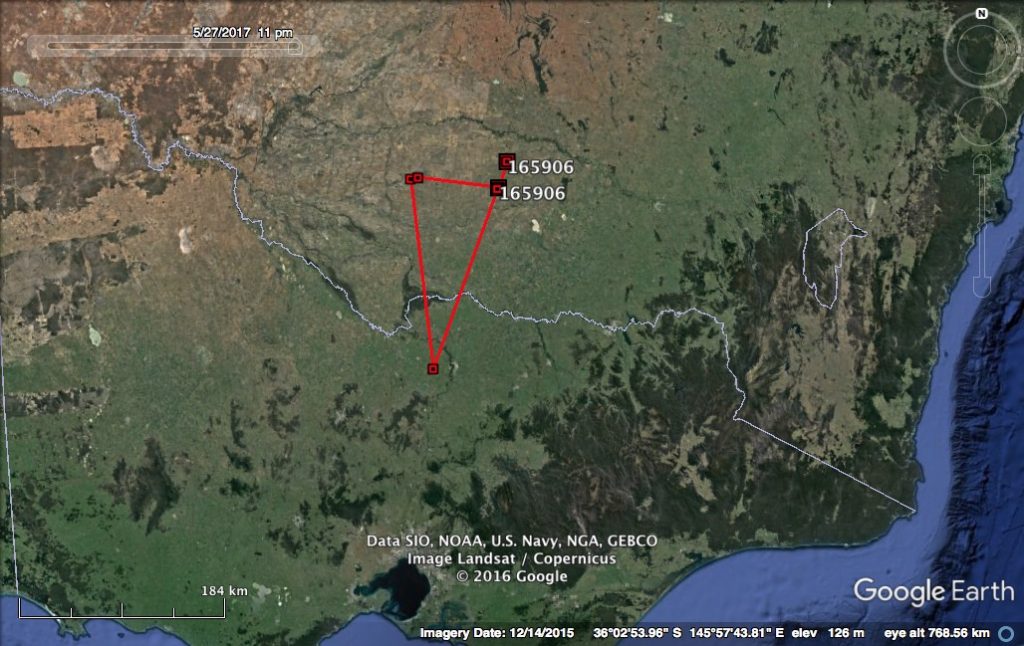 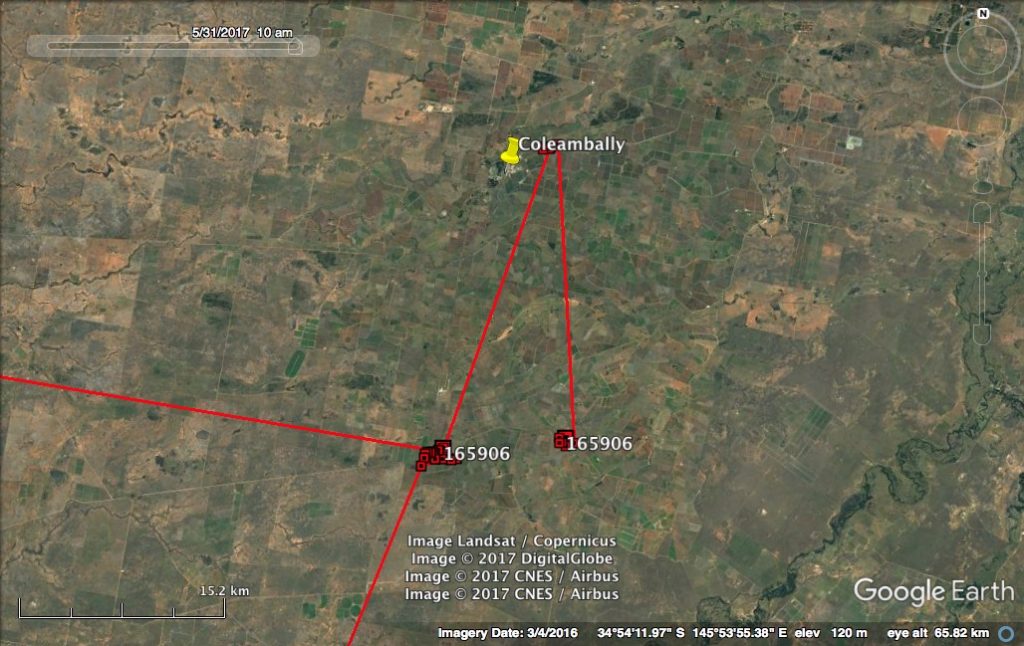 Arnold has returned to Coleambally after venturing to Boorooban and northern Victoria.

We’ve come a long way in understanding where the bitterns go when the fields dry up and the rice is harvested. Three years ago we were hatching our plans to satellite-track these secretive birds and preparing to take on the crowdfunding world. We suspected that a large proportion of the population departed the Riverina in autumn and headed to coastal wetlands. Notwithstanding those elusive females, I think it’s now safe to say that we got it right. 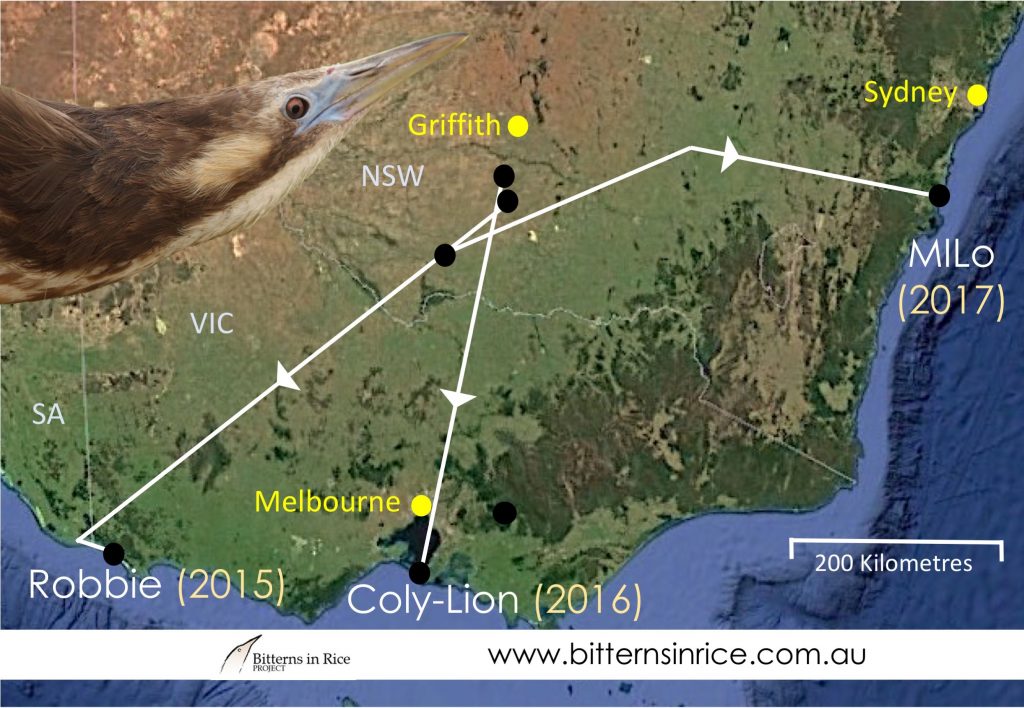 The three big movers: Robbie, Coly-Lion and MILo dispersed to the coast.

In most years, outside of the rice-growing season, there is limited bittern habitat in the Riverina. Monitoring by Birdlife Australia at the Edithvale-Seaford wetlands in Melbourne showed larger numbers of bitterns during winter, which seemed to coincide with a post-harvest departure from the Riverina. With these factors in mind, it was a fair prediction. But not all of the bitterns in rice head off to far-flung wetlands on the coast. Prior to any tracking, we undertook winter and spring surveys at wetlands most likely to support bitterns in the Murrumbidgee and Coleambally rice-growing regions. We found a handful of sites – Campbell’s Swamp near Griffith, a dam at Tuckerbil Swamp near Leeton and a Cumbungi-lined drainage channel near Coleambally – that supported four or more bitterns. But none of them had bitterns in summer, so it was a reasonable assumption these sites had acted as non-breeding refuges and their bitterns had moved on to find new rice crops. In November 2015, Fivebough Swamp, also near Leeton, supported at least 34 bitterns but almost all of them dispersed with the onset of summer and the availability of rice crops with sufficient cover. We still get records of bitterns in wheat crops too. The key point is that despite the clear value of coastal wetlands, some bitterns stay. Arguably, providing refuges during the colder months of the year, within and surrounding the Riverina, will give our bitterns more options and mean less of them need to make the arduous journey to the coast.

What’s also becoming clear is that the bitterns that do leave are taking us to the foremost coastal swamps of south-eastern Australia. Robbie showed us Pick Swamp in South Australia and Long Swamp in south-western Victoria, both renowned for their conservation value. Coly-Lion took us to Tootgarook Swamp on the Mornington Peninsula. It’s considered the most important freshwater wetland in the Port Philip and Western Port Bay regions. And more recently, MILo took us straight to Coomonderry, the largest, semi-permanent freshwater swamp in coastal New South Wales. He’s been there for almost a month now. There’s been two other big movers so far; Vin from Coleambally and Neil from Murrami, both of whom we prematurely lost contact with. Vin dispersed almost 200 km and was heading in same direction as MILo before we lost contact, while Neil dispersed 450 km via Swan Hill to Moodie Swamp near Benalla. There’s a good chance they too were on their way to the coast. The extent and quality of large, freshwater coastal wetlands could be a key factor in limiting the bittern population.

The other tracked bitterns, rounding out the ten so far, have been COG, Bidgee, Cumberland and Demo. Last season, COG made local movements around Murrami but never dispersed from the rice fields and then we lost contact. The transmissions from Bidgee and Cumberland, both from rice crops near Barrenbox Swamp this past season, have been perplexing, potentially indicative that their harnesses have fallen off prematurely, the transmitters have been damaged and/or the birds are dead. But we’re not yet ruling out the possibility of dispersal that would confirm they’re in fact alive and well, and being tracked. We are watching Demo closely as well. He is making local movements around Coleambally and could disperse any day now. Will he join the coastal dispersal club, and if so, where? Watch this space …

For anyone in our nation’s capital later this month, you may be interested in heading to the Canberra Ornithologists Group meeting on June 14th at 7:30 pm. It will feature a presentation with all the latest Bitterns in Rice Project news, including population monitoring and our plans to monitor chicks with a thermal drone next season. There are also public presentations being held in Deniliquin (June 15) and Barham (June 16).