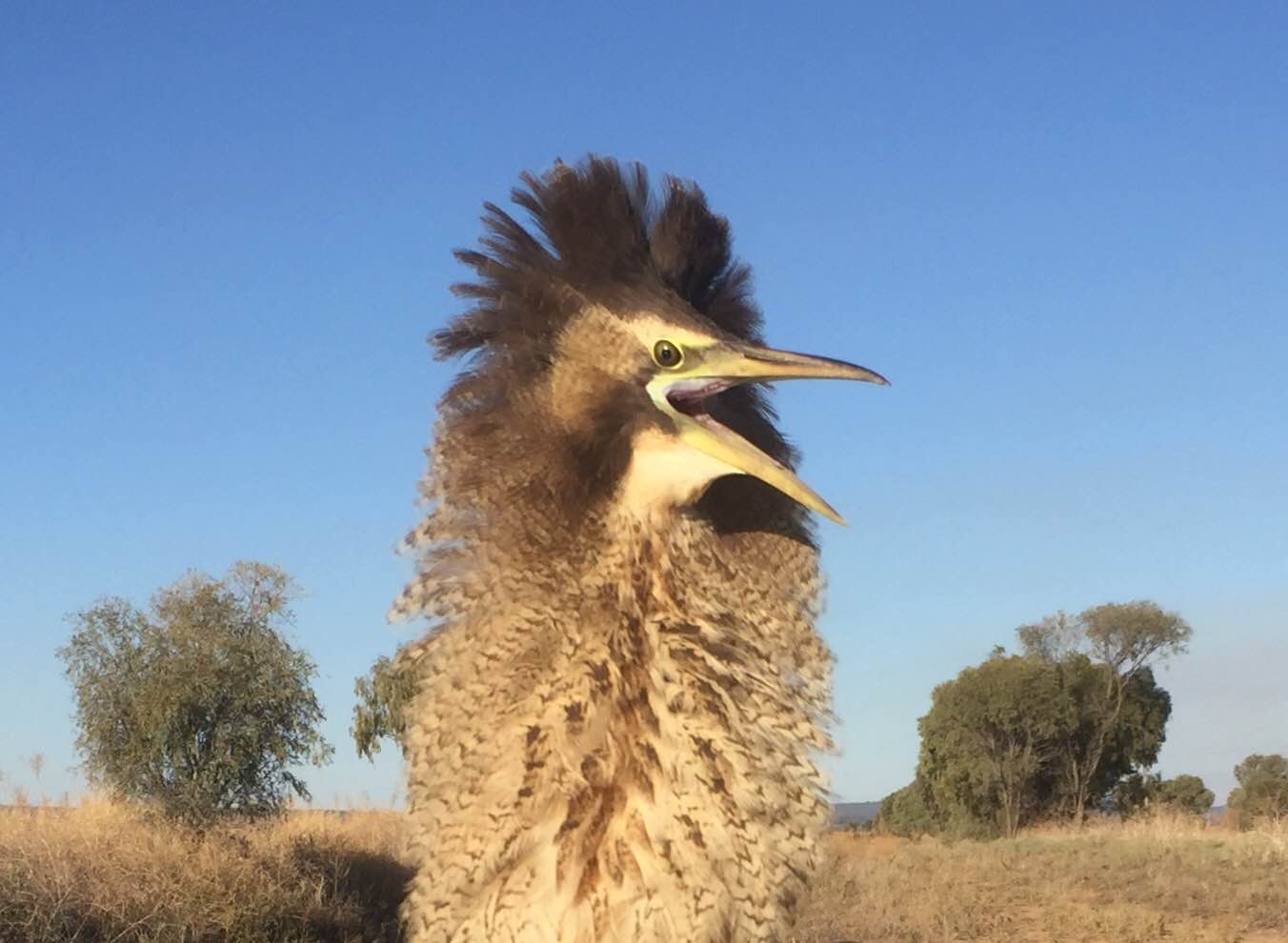 We’re sad to say that we’ve lost contact with Robbie. He’s been such a champion and has become an icon for the species. He may never read this but we thank him for his spectacular journey that began on April 21st, 2015. Inka Veltheim and I met him in a rice crop near Coleambally and what followed has provided unprecedented insight into the movements of these cryptic, endangered waterbirds. He’ll always be the first ever Australasian Bittern to be tracked by satellites. He made nine state border crossings (NSW-VIC-SA-VIC-NSW-VIC-SA-VIC-SA-VIC) and used a wide range of wetlands but spent most of his time at the recently restored Long Swamp in far south-western Victoria.

On losing contact, Robbie’s story attracted lots of media attention, culminating in a live television interview and website article on BBC World News. He’s officially the most famous bittern in history. It’s impossible to know whether it was just his transmitter or harness coming to the end of their life or whether this much loved bird may have succumbed to a fox or some other fate. In any case he’s left some big shoes to fill. 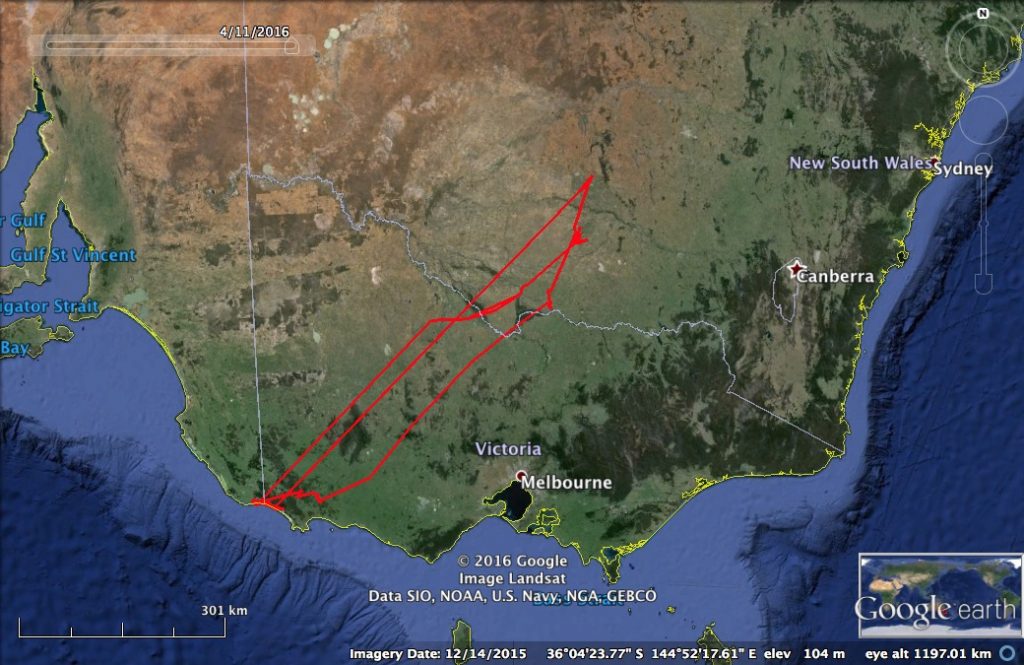 Bitterns go out of their way to remain concealed in wetland vegetation, avoiding visual detection. Even at the best of times they can be hard to spot. Catching them presents a new challenge altogether. With the breeding season behind us, the option of luring booming males into cages with the use of a mirror and call playback was out, so it was back to the net gun. Finding a bittern is one thing; getting within ten metres to have a shot is another. Thanks to the help of dozens of rice farmers that have been reporting their sightings from harvest, we’ve had a successful week. 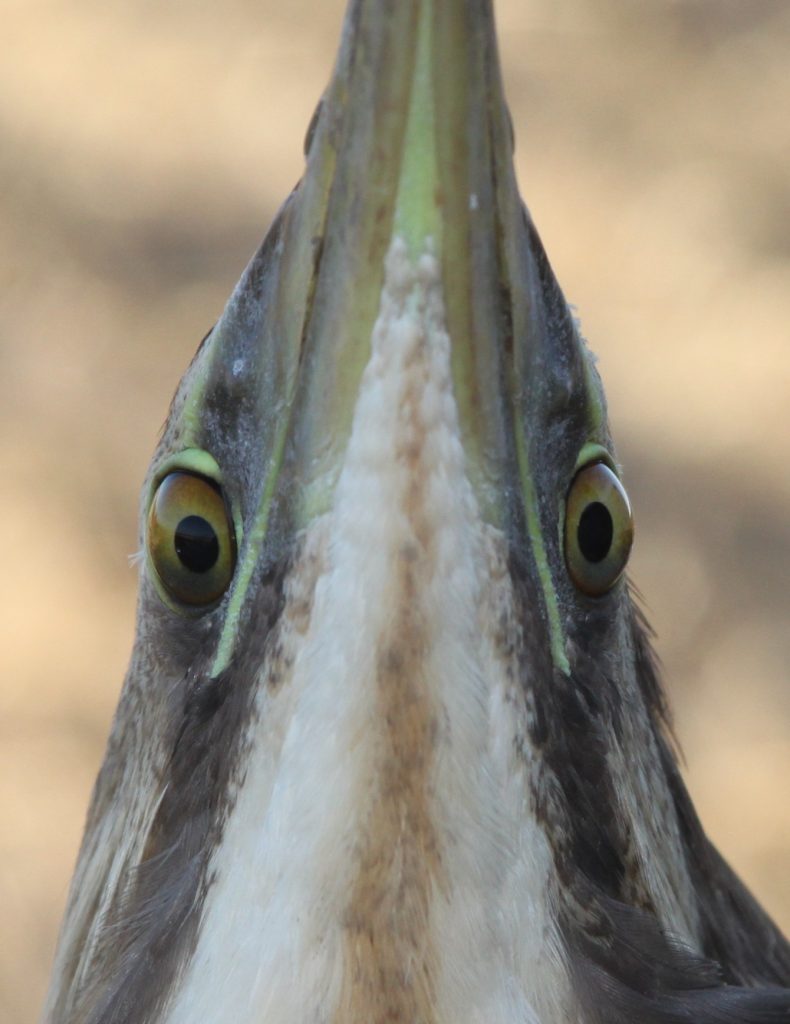 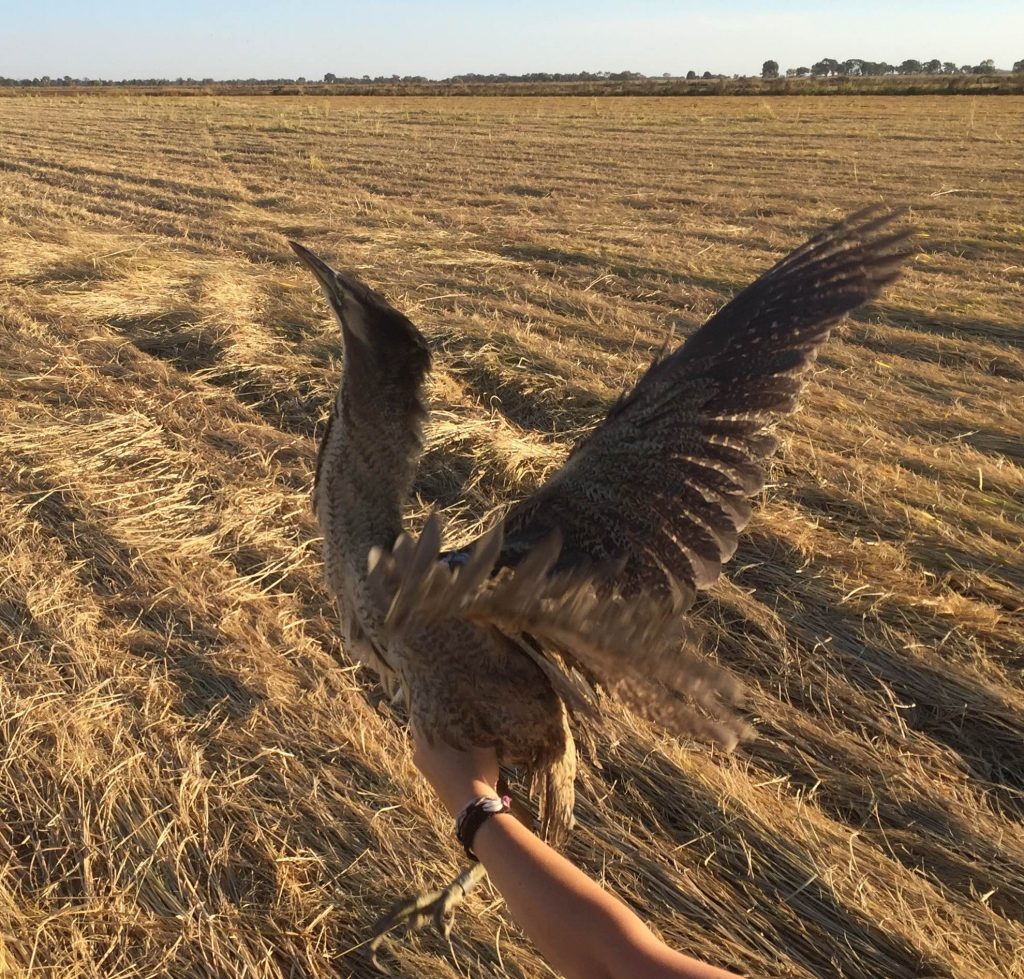 Meet Neil, a young male fitted with a satellite transmitter at his harvested rice crop near Murrami, NSW.

Last Sunday we were thrilled to catch Neil. His weight, appearance and behaviour was uncannily similar to Robbie. This young male from Murrami, between Leeton and Griffith, was presumably born in a local rice crop around January. He was clinging to an already harvested crop that was almost completely dry. He’s named after Neil Bull from the Rice Growers’ Association. Neil was central in establishing the Bitterns in Rice Project and continues to be a driving force in its development. We think his bittern is bound for glory and filling Robbie’s big shoes is not out of the question. He has already made a 5.75 kilometre move to the west to a late, unharvested crop that still has some water. Funnily enough, we had been there several times trying to catch other bitterns. After witnessing Robbie’s dispersal to South Australia last season, there’s every chance we’re about to see a big move from Neil. And it’s not just Neil who we’ll be watching. 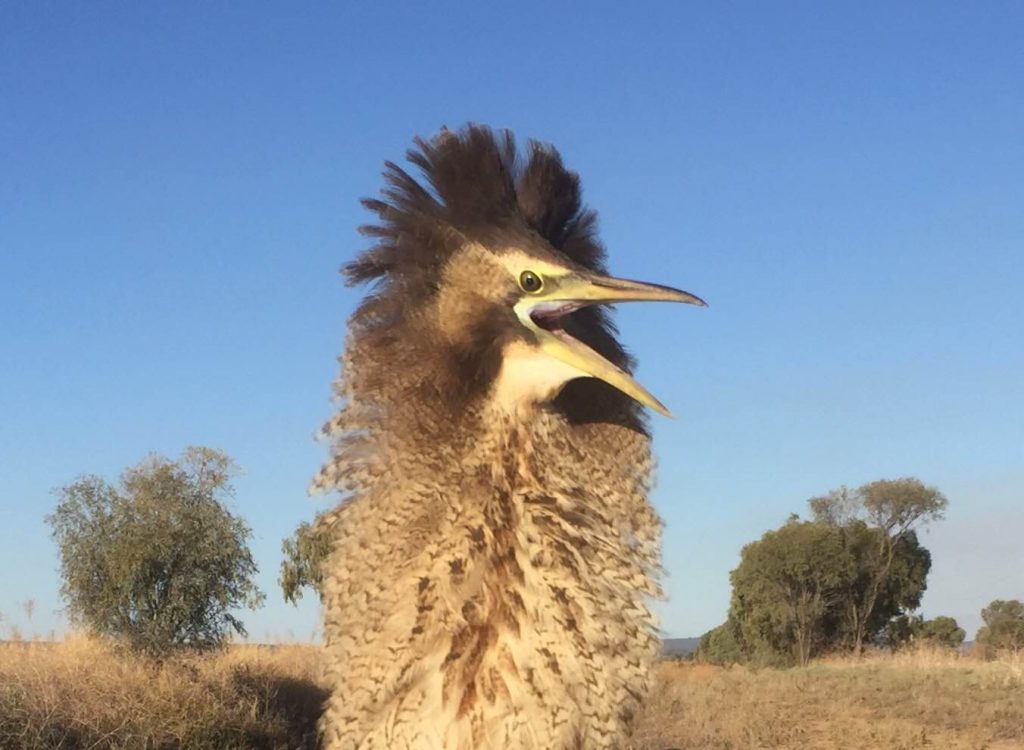 Meet COG, apparently the most adorable and hilarious feather duster, another young male from Murrami set to reveal post-harvest movements.

On Anzac Day, less than 24 hours after the joy of adding Neil to the Tracking Bunyip Birds crew, and still in the Murrami area, we hit the jackpot again. It’s our pleasure to introduce COG, as in Canberra Ornithologists Group, another organisation to make a generous contribution to the crowdfunding. COG was also a dead ringer for Robbie, a 3-4 month old male successfully bred in rice. Strangely enough, COG has already moved 2.5 kilometres straight to where we caught Neil. We’ll have Neil and COG’s sex confirmed by DNA but we’re already wondering where the seemingly elusive young females are. In the meantime, we’re on the edge of our seats waiting to see where these young fellows go. 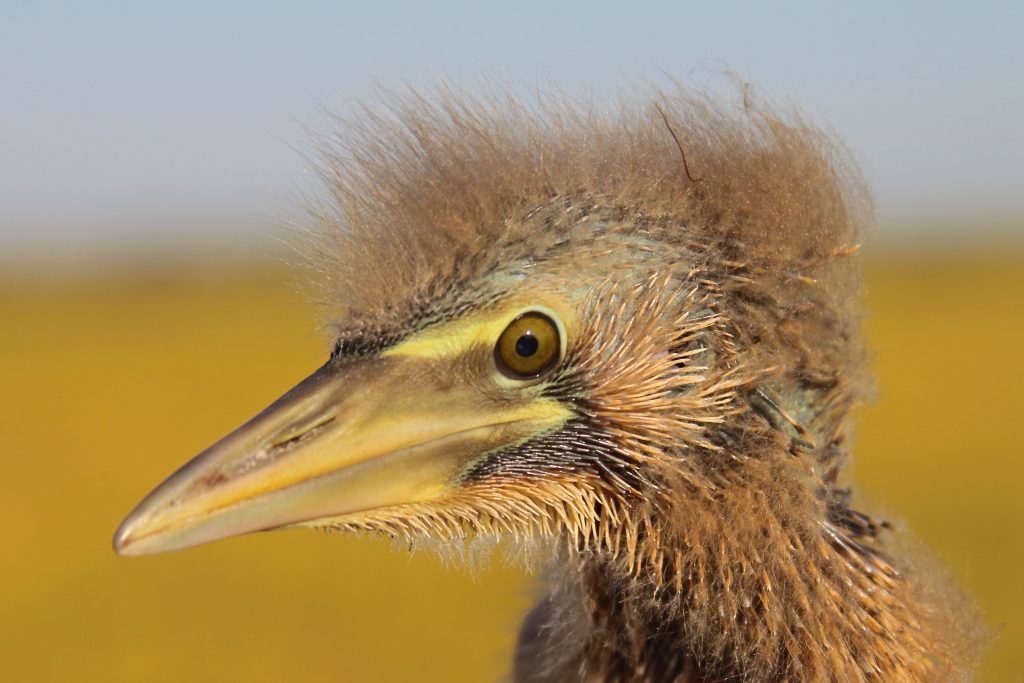 The bittern chicks were looking as stylish and prehistoric as ever this season.

In other news, shortly after the Threatened Species Commissioner’s visit, we attached radio transmitters to two of the chicks he’d met, with the view to replacing them with satellite transmitters and a harness once the birds were big enough and close to fledging. Unfortunately, we recovered the radio transmitters a month later but without the birds. At least one of them had died, most likely killed by a fox. 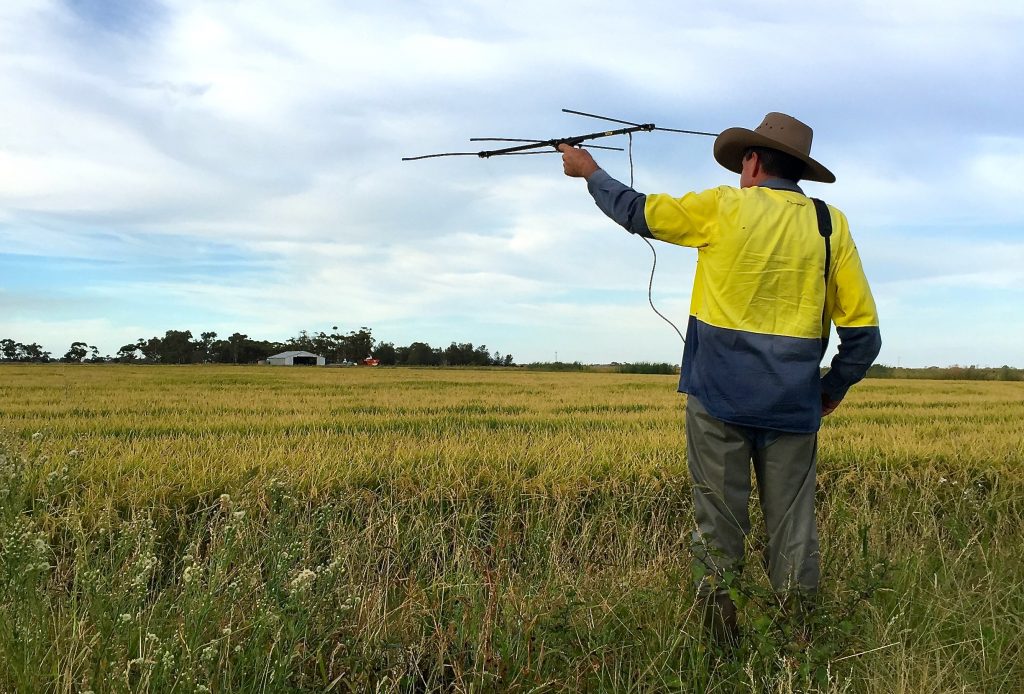 Mark Robb receives signals from two chicks with radio transmitters in a nest.

At the end of March, Vin dispersed 191 kilometres to Stockinbingal, near Temora. This adult male left the Coleambally rice fields in almost the opposite direction to what Robbie did. It appeared he was using a farm dam as a stop-over but unfortunately we have now lost contact with Vin, with the last fixes still in that area around Stockinbingal. Again, it’s impossible to know whether or not it’s a transmitter issue or if Vin is no longer alive.

Meanwhile, Coly-Lion remained in his booming territory where we caught him in January. We’ve also lost contact with him and this time it’s clear that it’s been a transmitter issue because he was photographed alive and well with the harness and transmitter still on his back after we stopped receiving transmissions.

Both Vin and Coly-Lion confirmed how territorial adult booming males are during the breeding season, with three months of data showing them only rarely venturing to a neighbouring crop. And Vin has indicated a very new direction for post harvest movements. He may have been heading towards some of the large swamps around Canberra and Goulburn that are known to support bitterns. Perhaps Neil or COG will head there too. We’ll soon see … 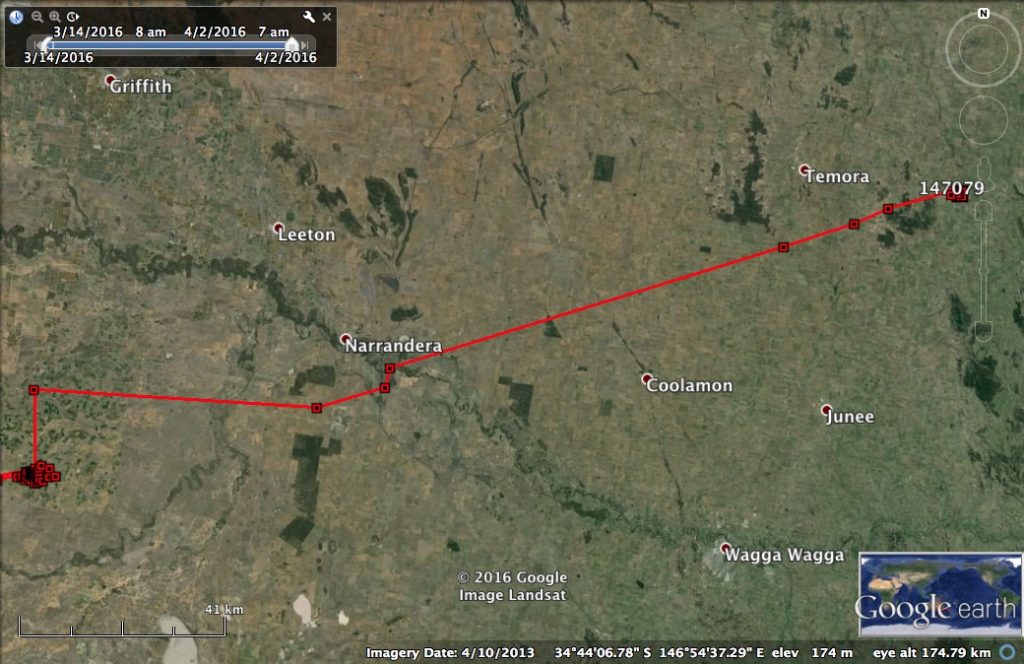 Vin dispersed at least 191 kilometres ENE of his breeding territory in a Coleambally rice field.

Near the centre of Coly-Lion’s booming territory, as indicated by the tracking data, we found a nest where the chicks had already begun wandering.